skip to main | skip to sidebar

In case you haven't tried it yet, a beer and food pairing dinner is a fabulous way to spend an evening with friends.  Nationwide, chefs and brewers alike are putting care & love into creating great food and great beer experiences: a delightful development in the craft beer industry today.
Thank you all the fantastic chefs and enthusiasts out there
who take the time to prepare fine food and libations for us!

These photos are from a unique meal that pairs each course with 2 samples of a Belgian beer style: a Belgian original and an America version of the same style.  The happy diners then choose their favorites and debate the merits of stylistic contributions while working their way through an amazing diversity of food and beer.

Course 1 revealed the secret menu & beer list which opened with with delicate wit and  & fresh oysters
With the super-secret menu, even I didn't know if Odonata Saison would be on the evening's agenda.  So I was thrilled when the  house's Cellar Reserve Saison came out against the wonderful Glazen Toren D'Erpe-Mere.  The owner and the chef each made some dining comments and the tasting began.
The Saison comparison was a good match for both style and technique: both the Odonata and the Glazen Toren had been laid aside for traditional farmhouse cellar conditioning: a technique not commonly found in the fast-paced American production market.  I was amazed at the similarity in the complex nose of the two Saisons with both finishing very dry but full of fruity Belgian flavors.

With the fatty richness of the paired pork belly tostone (corn foundation), the Glazen Toren exhibited more of a floaral/herbal finish and the Odonata Saison highlighted a dry black raspberry note.  The Odonata was slightly fuller on the malt - reflecting our more american malt bill.  Rumor is the vote tallied slightly in favor of the local brew :)
http://www.ratebeer.com/beer/glazen-toren-saison-derpe-mere/44593/
http://www.ratebeer.com/beer/odonata-saison-bottle/119403/

While the crisp Saisons had been paired with a rich pork belly course, next a light and beautiful salad was presented with the full flavored Tripels from St Feuillien and Allegash.  I was sad to see that salad go but plenty was still on its way.
The rich spicy Triple IPAs came next with a spicy duck "wing" that was so good I didn't even want to let the bones go to waste.  I thought after the duck wing course it was going to be hard to beat, but then along came  a wonderful cheese interlude.
The Black Diamond Dubble was a solid hit with the honey and Humbolt Fog cheese.  Not an easy feat with the tart-sour-strong-sweet of honey and cheese, but the beers and the course delivered delightfully.

If you're trying to decide what to do for a belgian dinner, throw in some Flemish Red and a traditional Flemish stew - how could you go wrong?  Of course, when you decide to make it your Lost Abbey Red Poppy course..... you are destined to make the dinner epic.


Dessert was served.  Glasses were emptied.  Toasts were echoed.  The evening was delightful.

Posted by Tracy BrassBalls at 2:19 PM No comments: 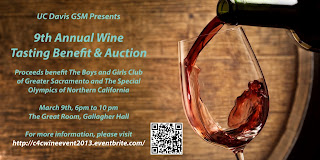 One of the things I loved about my childhood, was that I spent time both living and working on a Barley Farm in Saskatchewan and in the Orchards and Vineyards of British Columbia.  Here in California I feel at home with a foot in both agricultural (and fermentation) roots.  This is one of the reasons I deeply respect the UCDavis Wine and Brewing programs:  It takes a special culture and understanding to chooses to invest in the future of both industries the way UCDavis has.  That dedication is reflected in the commitment the UCDavis Graduate School of Management demonstrates in developing business leaders who know about  California's great fermentation industries and prioritize charitable service.

So I am especially delighted to be pouring Odonata Beer’s Saison alongside a few dozen fabulous regional wineries at the Challenge for Charity… and not only are we raising money for charity – but I also love the chance to challenge a few die-hard wine pallets to a renewed appreciation of the subtly and quality in truly fine farmhouse ales.  I am bringing Odonata Beer's finest reserve cellar aged Saison and I expect craft beer enthusiasts to emerge :)

Here are the details for anyone in NorCal looking for a delightful outing tonight:


MBA Challenge for Charity (C4C) is a consortium of nine west-coast business schools that has been promoting philanthropy among business students for twenty-seven years. This year, the students of the UC Davis Graduate School of Management will host their 8th Annual C4C Wine Tasting Benefit and Auction on Saturday, March 9th, 2013, 6-10 pm.

The Wine Tasting Benefit will be hosted at Gallagher Hall, located on the UC Davis campus, and proceeds will benefit the Boys and Girls Club of Greater Sacramento and the Special Olympics of Northern California. An eclectic mix of business executives, community leaders, and distinguished university faculty and GSM alumni will all gather to sample wines from several local wineries, beer from local breweries, indulge in delicious hors d’oeuvres, and bid on a diverse group of auction items.

Tickets at the door  https://www.facebook.com/C4CUCDavis.

Posted by Tracy BrassBalls at 12:48 PM No comments: 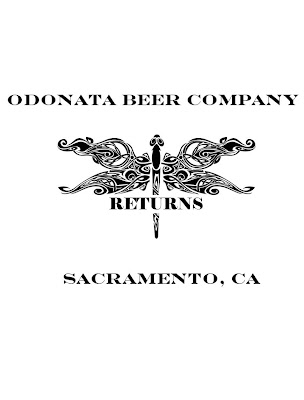 Odonata Beer Co is pleased to announce its return!!!!!
Celebrate in Sacramento during Beer Week with our limited edition reserve release:

Odonata Beer Company's limited reserve Cellar Aged Saison is a special release of our flagship Saison that has been conditioned in perfect Wine Cellar conditions.  Like a fine wine, our Saison is traditionally designed to be aged and the bottle conditioning has allowed the live yeast to provide a very dry exquisitely herbal finish along with the refined tropical fruit notes which define our outstanding Saison.  Drinkable and refreshing, this beer scored an impeccable 98/100 points before we laid it aside for cellar conditioning - and industry experts are calling our reserve inventory better than the original!

After a short hiatus, Odonata Beer is thrilled to announce it's resurrection and our Reserve Saison is being made available only by arrangement as a celebration of our local establishments and the fine beer enthusiasts of Northern California!

For a full description of the original beer:
http://www.ratebeer.com/beer/odonata-saison-bottle/119403/

I look forward to meeting friends old and new at events and at our facility when we get it open later this year.
--Tracy Bethune--
OBC Owner 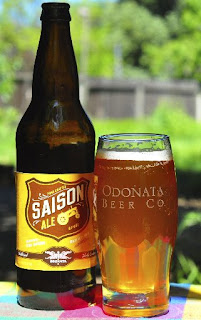 Posted by Tracy BrassBalls at 8:43 AM No comments: